Home/News/Education/Class of 2016 Celebrated at Commencement

“I challenge each one of my classmates to realize just how far we’ve come.”

Jenna Salner, president of the Class of 2016, offered this task to her fellow graduates at the 42nd commencement of the SUNY College of Optometry on May 26. And indeed they have come far during their four years at the College, with their journey culminating on a steamy spring afternoon in front of friends and family at the Roosevelt Hotel in midtown Manhattan.

“We’re here to celebrate the achievements of these talented young people,” SUNY Optometry President David A. Heath told the gathering. “Your skills, your knowledge, your passion are needed now more than ever.”

Dr. Ramanathan Raju, president and chief executive officer of the New York City Health and Hospitals Corporation, the largest municipal healthcare system in the nation, gave the commencement address where he recognized the key role that optometry has played in the changing health care system.

“Optometry has been a leader,” Dr. Raju said. “Helping to make health care a more efficient and pleasing experience.” He went on to say that “all of health care needs to be more like optometry.”

Dr. Raju advised the newly-minted doctors that if they demonstrated their value and put their patients first they would succeed in their careers, no matter what their mode of practice.

For the third straight year, President Heath conferred the Presidential Medallion to a long-serving member of the faculty. This year’s recipient, Dr. Scott Richter, is retiring from SUNY Optometry after serving the institution for four decades.

“I give thanks to my colleagues and to my students for pushing me further than I ever would have gone,” he said after receiving the honor.

In addition, the Benjamin Franklin Society Award was presented to Optometric Center of New York trustee, Mr. Harold Wilshinsky, in honor of his many years of service to the foundation and the College.

Earlier in the day, SUNY Optometry presented a series of graduation awards to members of the Class of 2016. Below is a complete listing of the awards and recipients:

To see and download images from the Graduation Awards Ceremony, click here (or on the image below) 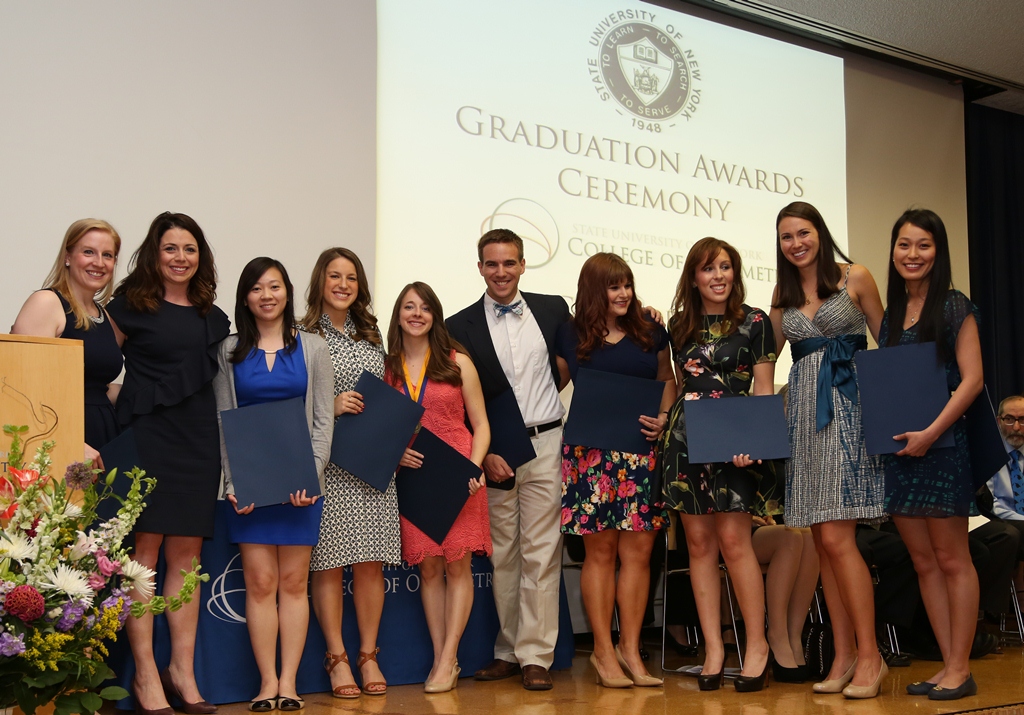 COLUMBIA  CLASS OF 1936 AWARD
For Academic and Clinical Achievement in Ocular Pathology (Sponsored by the Class of 1936, Columbia University, School of Optometry)
Brittney Melissa Gewolb

CLASS OF 1991 PACESETTER AWARD
For Excellence in Primary Care (Sponsored by the Class of 1991, SUNY College of Optometry)
Alison Emiko Noritake