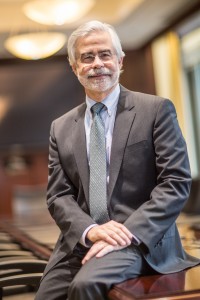 President David A. Heath has been elected to lead the Association of Schools and Colleges of Optometry (ASCO), the organization that represents the 21 schools and colleges of optometry in the United States and Puerto Rico. His term begins on July 1.
Dr. Heath has been involved in optometric education for more than 30 years and has been a member of ASCO’s Board of Directors since 2007. He is also active with the American Optometric Association and the New York State Optometric Association.

“The coming year at ASCO will be one of transition and opportunity as our new executive director, Ms. Dawn Mancuso, begins her tenure and as we initiate a comprehensive strategic planning process,” President Heath said in a statement. “This is an important time as we enter ASCO’s 75th year as an association. As a community, we will embrace this transition as an opportunity to increase the impact of ASCO and to advance optometric education.”

Dr. Heath previously served as president of ASCO during the 2012-2013 academic year.