Home/News/Alumni/It Gets Greater Later: Reunion for SUNY Optometry Graduates of the 1980s 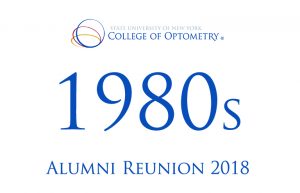 The New York City of the new millennium is very different from the Big Apple of the 1980s. But for all of the changes (goodbye graffiti-covered subway cars), one ’80s legacy remains: the camaraderie experienced by the graduating members of that decade’s classes at SUNY Optometry. For reunion ambassadors Dr. Michael Melzer ‘83, Dr. Felicia Donnolo ‘88 and Dr. Susan Resnick ‘83, the October Envision NY weekend is a chance to recapture what was so special decades ago.

Dr. Melzer, an optometrist at Nevyas Eye Associates in Marlton, N.J., had ambitious—some might say competitive—reasons for becoming a class ambassador. “I attended a 30th reunion class event five years ago and looked forward to seeing many of my old classmates,” he says. But he was “disappointed” when only six people showed up “out of 75.”

He is hopeful that this year’s numbers will be significantly higher. “You are with the same 75 people for four years—which has its advantages and disadvantages,” Dr. Melzer says, adding that the closeness of his graduating class is his fondest memory about the College. “The excitement on graduation day when we all realized a goal was finally achieved was wonderful.” He thinks the reunion will give everyone a chance to interact and reminisce.

Like her former classmate, Dr. Resnick, has ulterior motives for being a reunion ambassador. Since graduation, she has become the president and managing partner of a private specialty contact lens practice in Manhattan. She has worked hard—which is why it’s not surprising that she wants to see her classmates to learn about their professional and personal achievements. “But mostly, I want to hear about their views and plans for retirement!” she says.

More seriously, Dr. Resnick hopes that by serving as an ambassador, she will be a part of something that is as special as the group of graduates. “Our class was truly unique in many ways: ages, backgrounds, interests. We never took anything too seriously and there was a very collegial environment” she says. “We were all for one and one for all.”

Brooklyn-based optometrist Dr. Donnolo is returning as a reunion ambassador. “My friend Dr. Effie Tatakis ’88 and I organized previous reunions that were a wonderful way to reconnect with very good friends we hadn’t seen in years,” she said. “Word spread that everyone always had a great time, so each year more people showed. This year we have the biggest group yet, with almost 40 attendees.”

Being an ambassador has brought its own payoff, including special moments that happen before the reunion even begins. Says Dr. Donnolo: “Every time someone emails me—although I have their 1980s haircut and face in mind—I smile. I know everyone else is happy to hear from classmates, too.”