Our Mission, Values and History

The State University of New York College of Optometry advances visual health and patient care through leadership in education, research and service.

In 1910, New York City’s Columbia University opened the first, university-based school of optometry in the United States. When it closed its doors in 1956, New York and the entire surrounding region was left without a school or college of optometry. 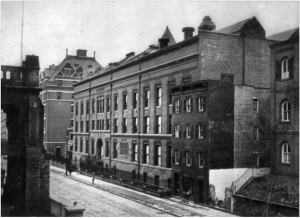 around New York City and the surrounding region came together to form the Optometric Center of New York (OCNY), a nonprofit health and education resource, as a way to fill the void left by the closing of the school at Columbia. The OCNY conducted vision and eye research, provided post-graduate course work and also established a much-needed clinic, as well as a series of satellite clinics in under served areas of the city.

After more than a decade of lobbying from the OCNY, as well as the New York State Optometric Association, the New York City Health Commissioner and others who recognized a desperate and growing need for more optometrists in New York and the surrounding region, the New York State Legislature unanimously voted to establish a new college of optometry at the end of its 1970 session. Governor Nelson Rockefeller signed the bill, however, due to an amendment that needed to be made to the bill, two additional bills were passed during the next legislative session and on April 14, 1971 Governor Rockefeller signed those bills to officially establish the State University of New York College of Optometry. Dr. Alden N. Haffner, the OCNY’s executive director, became the founding president. The initial class entered the College in September 1971.

In addition to its educational and clinical responsibilities, the College also took over the OCNY’s research program, helping to establish the SUNY College of Optometry’s reputation as a major hub for vision science research that has continued to this day. Research activities have steadily grown at the College over the years. In fact, in 2013, SUNY Optometry secured nearly $3.9 million in research grant funding, representing more than six times the funding that the College received just a decade-and-a-half earlier. 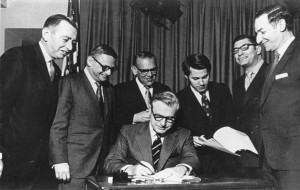 SUNY Optometry initially moved into an eight-story building on East 25th Street near Lexington Avenue in Manhattan where the OCNY had been operating a clinic for many years. Shortly after opening, however, the College rented space in a second building on East 23rd Street and, in 1976, consolidated its facilities into a 130,000 square foot space within a 20-story building at East 24th Street and Park Avenue South. This remained the SUNY College of Optometry’s home for the next quarter century.

The College grew steadily and between 1972 and 1982, enrollment jumped from about 50 total students to over 250. In 1974 the College launched its first, year-long residency programs, including the first vision therapy residency program in the nation. 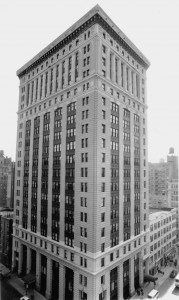 In 1978 President Haffner left the College to become the vice chancellor for research, graduate studies and professional programs for the State University of New York system. Dr. Edward R. Johnston became the College’s second president and remained at the helm until 1987 when Dr. Haffner returned for a second stint as president.

In 1999, the State University of New York system approved the College’s move from its East 24th Street location to its current home, an historic, 18-story building on West 42nd Street. Built in 1912 for the Aeolian Piano Company, the building, which had most recently been occupied by The Graduate Center of the City University of New York, had originally housed the renowned Aeolian Hall which hosted numerous, highly-regarded performances in the 1910s and 20s. In fact, George Gershwin’s “Rhapsody in Blue” made its world debut at Aeolian Hall during a performance on the afternoon of February 12, 1924. After a series of renovations to accommodate the College’s clinic, the move was completed in May 2000.

Founding President Haffner, after serving a total of 26 years at the helm, retired from the SUNY College of Optometry at the end of 2005. Dr. David A. Heath was appointed the College’s third president by the SUNY Board of Trustees in early 2007.

In 2008, the College adopted a comprehensive strategic plan called A Shared Vision, with the goal of putting the institution on the appropriate track toward providing the most innovative education and patient care possible, as well as to help advance vision science through significant and bold research efforts. In spite of the challenging economic environment in which it was implemented, A Shared Vision helped to establish several key programs at the College, including the Graduate Center for Vision Research, the Center for International Programs, the Career Development Center, the MBA Certificate program and more.

In 2009, the OCNY launched The Vision and the Promise, a five-year, $10 million fundraising campaign designed to support the growing and ambitious educational, research and patient care activities of the institution, and to help support its increased philanthropic work in the community.

That same year, the College’s clinic, the University Optometric Center, was renamed the University Eye Center (UEC) and its referral service was also established. Since then, the number of patients referred to the UEC each year has increased nearly threefold. In 2012, the clinic received over 75,000 patient visits, a more than 27 percent increase from just seven years earlier.

After more than five years of planning and design—and two years of construction—the three-floor, 20,000 square-foot Center for Student Life and Learning opened in 2013. The dynamic new space includes a large preclinical procedures laboratory, classroom and study space, a large seminar room, lounges, event space and a fitness center.  The new Center provided a vast improvement to both the learning and recreational facilities of the College. Later that year, additional renovations were completed to upgrade the College’s research facilities as well.

Having produced more than 60 percent of the practicing optometrists in New York State, the SUNY College of Optometry has more than lived up to its promise of over four decades ago to provide the region with much-needed health care practitioners. Indeed, the College is a thriving and innovative institution that is dedicated to meeting the future health care needs of our community, blazing new paths through ground-breaking research and providing the most innovative education available.