The pediatric optometrist invests in communities near and far.

To hear her family tell it, being a doctor was Viola Kanevsky’s only option. “For as long as I can remember, my mom introduced me to people as, ‘My daughter, the doctor,’” says Dr. Kanevsky. “Perhaps because my grandmother was a pediatrician, perhaps because I loved deboning herring, or maybe just because she wanted to make sure that I would always be able to support myself in a stable and respectable profession, this was the only choice I was ever given.” 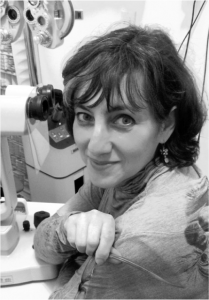 Dr. Kanevsky, an immigrant from the former Soviet Union, rebelled briefly as a pre-med student when she announced that she was dropping out and enrolling in art school. But her mother handed her an autographed copy of Netter’s Atlas of Human Anatomy and encouraged her to pick a specialty that required drawing.

Yet it was running an errand with her father that actually won her over. “I closed my eyes and half-listened to the odd rhythm of ‘one or two, three or four, five or six,’ interspersed with the satisfying little clicks the doctor made as he snapped lenses into place in front of my father’s eyes,” she says of the visit to the optometrist. “It all seemed rather magical, as if I had stepped into a mysterious dimension. I was awakened from my reverie when the doctor turned and said, ‘Your dad tells me you’re studying to be a doctor. Ever consider optometry? I have loved coming to work every day of my life.’” She was instantly intrigued. “I thought, ‘Wow, that’s something you don’t hear often.’”

Dr. Kanevsky went on to attend Pace University and later earn her OD at SUNY College of Optometry. She has worked as a pediatric optometrist for nearly 25 years, co-founding her current practice, Acuity NYC, on the city’s Upper West Side in 2007. It’s a testament to the beauty of optometry that she constantly finds renewed joy in her work. “Optometry allows me to learn new things every day. There is nothing I shy away from, and I love having to think hard and solve problems,” she says. “Then, of course, I also love puppets and never really wanted to grow up!”

When she’s not working with her young patients, Dr. Kanevsky devotes a considerable amount of time to several causes, serving as metropolitan trustee of the New York State Optometric Association board, a board member of the Optometric Society of the City of New York and treasurer of the New York chapter of Volunteer Optometric Services to Humanity. She also travels to Peru to provide medical services to wards of the state and sits on several local arts boards. Much of her time goes to The Ship of Tolerance, a children’s project her parents created to teach cultural and religious cooperation and peace building.

“I very much appreciate that, by the luck of the draw, I was dealt a winning hand. I understand that most of the world’s population is not so lucky,” she says of her commitment to service. “My mom always told us that if we had too much of anything, we should immediately give it away to someone who has less because it can all disappear in the blink of an eye. I fully understand that I can only reap as much benefit from my surroundings as I sow.”