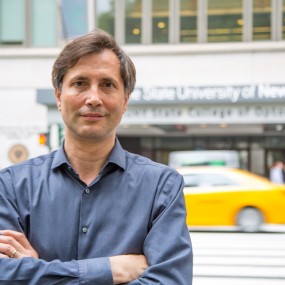 The National Institutes of Health calls it America’s next moonshot: a revolutionary, historic effort to view the human brain’s 86 billion neurons in action and transform our understanding of how we think, move, and perceive the world around us. Last year, in its first round of applications, the NIH’s Brain Research through Advancing Innovative Neurotechnologies (BRAIN) awarded $46 million in grants, and when the winners of the second round are announced, SUNY College of Optometry Professor Jose-Manuel Alonso and SUNY Polytechnic Institute Professor of Nanoscale Engineering Ji Ung Lee hope their names will be on the list.

For Alonso, it’s a logical next step after more than twenty years of studying how the brain processes visual stimuli. From the Universidade de Santiago de Compostela to the Universidad Autónoma de Madrid, Rockefeller University, the University of Connecticut and now SUNY Optometry, he’s focused on two main structures early in the visual pathway: the thalamus, which is sometimes described as a “switchboard” that relays information to the cerebral cortex, and the primary visual cortex, one of the best-mapped, most well-understood areas of the brain.

“Vision offers this wonderful window to understand how the brain works,” says Alonso, who ultimately hopes the probes will help lead to the next generation of Neuroprosthesis. “We have been using multi-electrode arrays for decades, and we have learned more about the visual brain than any other sensory brain structure. Now, with the new BRAIN initiative, there are funds available for physiologists and engineers to talk to one another, to work together, and to help us do what we have wanted to do for so long.”